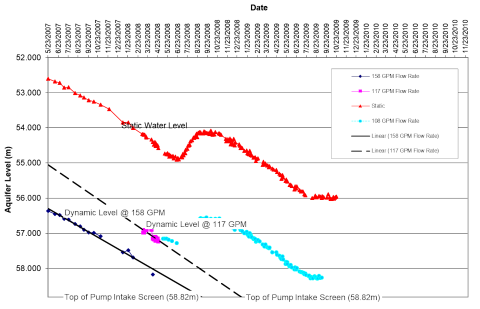 Problem: A small rural community was facing both quality and quantity issues with its water system. Many alternatives had been proposed, but all involved either significant operational risk (e.g., the water quantity problem might not be solved) or significant cost risk (e.g., up to two times Class C estimates).

Challenges: Tradeoffs are difficult.  Tradeoffs in the face of significant uncertainty are even more difficult. The cheapest solution was to recondition the existing well and add treatment technology to address the water quality problem.  However, the well logs showed a disturbing trend of decreasing recharges with each freshet.  The cheap solution might mean a dry well in a few years.  A less risky alternative was to connect to the water system of the nearest municipality.  However, there was serious uncertainty about the cost of running a water line over a long distance with variable terrain.  What the decisions makers needed was a crystal ball.

Process: We worked backwards from a willingness-to-pay framework.  We asked: How much would the community be willing to pay above and beyond the cheapest alternative in order to go with the lower-risk pipeline alternative?  If the cost difference was within an acceptable range, we would suggest the more expensive alternative.  If, however, the community was not willing to pay the difference for the less-risky alternative, they would have to cross their fingers and hope they were not facing the same decision a few years later when the well ran dry.

We created a Monte Carlo simulation of the net present cost of each alternative to capture the main sources of uncertainty.  The model included distributions to model grant funding, land acquisition costs, plus all capital and operating costs.  Some alternatives were well understood in terms of cost.  Others, such as drilling a new well, installing novel treatment technology, and running a pipeline through challenging terrain involved huge unknowns and were modeled with asymmetric (long-tailed) distributions.  Shared factors, such as effective interest rate and inflation were also modeled probabilistically given the very different cash flow patterns of the alternatives over a long time horizon. 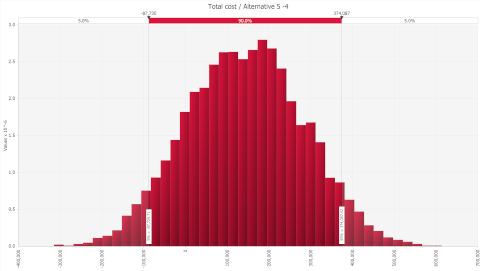 Results: The simulation results provide 90% confidence intervals on the cost difference between the low-cost and low-risk alternatives.  The expected cost difference was substantial and the community was unwilling to pay for the lower-risk alternative. This analysis effectively ended support within the community for the pipeline option.  However, it also opened the door for a mid-cost, mid-risk compromise in which a new deeper well was drilled and much of the existing infrastructure was retained.  The novel treatment technology for the “new well” alternative proved to be extremely problematic, but these costs were already factored into the probabilistic model. Decision makers committed to a course of action with a good sense of the range of outcomes beforehand and thus were in a good position to tradeoff cost and risk.