Public engagement in a COVID world

How do debate in the public square when the public square is roped off?  How do you maximize attendance at open houses when your public health officer limits the size of public gatherings?  One approach is to simply suspend public participation in important decisions for the duration of the pandemic.  But this is not a workable approach as COVID drags on.  No community can afford to make decisions in a vacuum for a year or more.  Moreover, the pandemic itself is creating an urgent need for decision making in the face of high stakes, uncertainty, and significant polarization.  These challenges are forcing many communities to think differently about how they engage the public in important decisions.

One thing should be clear: technology, by itself, is not a panacea.  This might seem like an odd statement coming from someone who has made his entire career in technology.  But in local government, as in other fields, an important distinction has to be made between bolting-on and baking-in.  Technology, if it is merely bolted-on to existing decision processes, will solve almost nothing and create an entirely new set of headaches.   For example, as many communities have discovered, webcasting public meetings is no substitute for real public meetings.  In my experience as an elected official, the best parts of public meetings—the really useful insights and ideas—often come in the informal one-on-one conversations that occur during set-up and takedown.  These ad-hoc personal interactions are very difficult to recreate when we limit ourselves to the very narrow goal of “webcasting our meetings”.  On the other hand, there are many things we can do with technology that are impractical to do in face-to-face settings.  Indeed, one of the earliest uses of computer technology in organizations—once the accounting and inventory control chores were automated—was “group decision support systems”.  The purpose of these systems was to use technology to mitigate common pathologies in traditional group decision making, such as groupthink, anchoring, freeriding, unquantified preferences, dominance by high status individuals, and so on.1 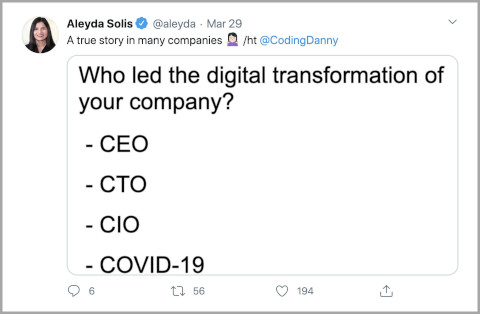 Exploiting the opportunities created by technology requires that the technologies be baked-in to the decision process.  And in this sense, COVID is as much of an opportunity as a threat for local government decision making.  The Twitter joke on the left was circulating in nerd circles in the early stages of the pandemic.  Many organizations found that digital transformation ceased to be optional; they were forced by the disease and its consequences to rethink their existing modes of operation and invest rapidly and creatively in new technology-enabled workflows.  If you are like me, you might find yourself dealing with your bank or insurance company lately in a way that makes you ask: Why didn’t we do it this way before?

A similar opportunity exists in local government to rethink our decision processes, abandon dysfunctional traditions, and capitalize generally on everyone’s willingness to do things a bit differently right now.  But to make the most of this, local governments have to be careful to introduce the right technologies, not just technology for technology’s sake or technology as a short-term band-aid.  It has to be baked-in, not bolted-on.

1In the early 1990s I recall Brent Gallupe, who had a research-oriented group decision lab at Queen’s, enumerate the many meeting and group decision problems that could be addressed with “group decision support systems” (GDSS). It was a compelling pitch. Brent was careful to differentiate between the technology components of group decision support—things like networked computers, graphical interfaces, and “electronic messaging”—none of which was widely adopted at that time—and enabling techniques, such as scenario analysis, electronic brainstorming, the Delphi method, Analytic Hierarchy Process, and Nominal Group Technique. Academia has since lost interest in GDSS as a field of inquiry, possibly because the technology components have become so embedded in our daily routines that they aren’t research anymore, they are mere product features.  We think nothing of texting snarky commentary to our allies during meetings using our phones or expressing our preferences in straw polls during Zoom calls. I get a bit embarrassed when teaching in WMC 2210 at Simon Fraser (which was once a GDSS lab) because I have to explain that the room, with its odd horseshoe shape, and elaborate custom computer consoles, was constructed for the sole purpose of allowing individuals to send snarky messages and vote electronically during meetings. Students don’t believe that such things were once considered innovations.  The downside of GDSS being completely overwhelmed by technology is that the accumulated knowledge of the enabling techniques has been swept into the same dustbin as Lotus 123.  The careful work on precisely how to aggregate group preferences has been replaced by ubiquitous Twitter polls.  If you read one of Brent’s academic papers from the era2 now, you are struck by two things: (a) how much technology has changed and (b) how little meetings have changed. Our focus on technology, rather than technique, means that we have largely failed to solve the underlying problems of group decision making.