Why seeking consensus is the wrong goal

The objective of many public consultation processes is to achieve consensus within a community behind a particular policy or initiative.  As discussed below, achieving true consensus around anything other than the most trivial motherhood statement is difficult, if not impossible.  And failure to acknowledge this difficulty is one reason that so many public consultations so quickly degenerate into a sales job, in which a local government desperately tries to convince its constituents that their favored course of action is best.

Why consensus is difficult 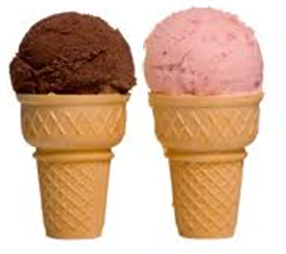 The difficulty of achieving consensus depends critically on what we are talking about.  For example, it is unrealistic to expect consensus around highly personal preferences.  People are different and they have different world views, circumstances, and tastes. I often make this point in public meetings using this picture (at right): most people agree that it is unrealistic to expect someone who likes strawberry ice cream to be talked into changing their preference by a bunch of people who prefer chocolate ice cream.  No amount of data on the intrinsic superiority of chocolate, no amount of scientific research on chocolate’s benefits, no amount of bullying, is going to alter that person’s preference for strawberry.  This is especially true if that person is also a strawberry farmer, and has an economic interest that aligns with (or is perhaps the root cause) of her preference.

So the first rule of consensus is that we should not attempt to achieve it on matters of taste or economic interests.  Our communities are too heterogeneous for that.  Indeed, if we make consensus in such matters a precondition for action, we will end up mired in debate and inaction.  Architects know this, which is why they are so willing to accept opposition to their aesthetic choices as part of their job.

This is not to say that we should have a blind faith in experts when it comes to complex causality. Rather we should (and have little choice but to) put our faith in the process of science.

Why consensus is unwanted

An absolutely critical feature of the process of science is that it actively abhors consensus.  No one gets published or makes a career in science by restating and confirming things we already know.  Rather, one makes a career in science by challenging the accepted wisdom, refuting existing hypotheses, and proposing new hypotheses.  Naturally rough consensus and agreement forms organically around certain hypotheses at any given time as “knowledge” but there is no expectation that this knowledge is eternal or beyond dispute.  That’s how science works.

For the same reason, we should actively seek differences of opinion and debate in our public consultations.  In the same way that science progresses through reasoned and structured disagreement, local government decisions can be refined and improved by a vigorous public debate and conflict.

As noted above, it is fruitless to argue about tastes or complex causal relationships.  But it is worthwhile to argue about mid-level goals and objectives.  Debate may not change minds, but it does serve to surface and legitimate differences of opinion.  Here the goal is not consensus, but a shared understanding of the dissensus—that is, a shared understanding of the legitimate differences of opinion across the preference landscape.

But like cholesterol, there is good conflict and bad conflict.  A distinction is commonly made in the decision-making literature between constructive, issues-based conflict and destructive interpersonal conflict.  Few would argue that in the past years, we seem to have slipped increasingly into vitriolic interpersonal conflict as our primary mode of public discourse.  But this is neither irreversible or inevitable.  For example, the early relationship between American founders and presidents Jefferson and Adams was characterized by much Fox-worthy name calling.

Perhaps someday the prevailing modes of discourse will return to a focus on substantive issues, rather than slander.  But in the meantime, rather than throwing up our hands and decrying polarization the “polluted public square”, we should exploit the well-established techniques that structure and mediate public debate so that interpersonal conflict is minimized.